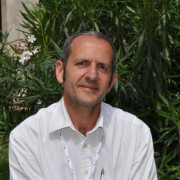 Andrea Di Cataldo was born in Catania, Italy on March 12, 1965. He became a Medical Doctor in 1989 and completed his specialization in the paediatric field in 1993. PhD in Pediatric Hematology and Oncology in 1998. He experienced a time of study, research and clinical practice in the Paediatric Oncology Unit at the Gustave Roussy Institute of Paris and in the Gaslini Children Hospital of Genoa. He has developed knowledge about the specific techniques that the bone marrow transplant in children requires. He participates at the National working groups for paediatric solid tumours. In 1999-2004 he was the Italian Coordinator for the Infant Neuroblastoma European Protocol. He is Principal Investigator of the SIOPEN European protocol for intermediate risk neuroblastoma, and in the Committee of the Protocol for low risk neuroblastoma. His clinical and scientific experience has been in the Paediatric Haematology – Oncology Unit of the University of Catania where he approached as a student and continues since 1989 as a Medical Doctor and since 2007 as Associate Professor, with the constant goal of curing the child as a whole and specifically taking care of the quality of life in children who have developed cancer. He is professor of Paediatrics and Paediatric Haematology in the School of Medicine, in Paediatric Specialisation School and in other different Medical fields, as well as in Phd courses. He is member of the International Society of Paediatric Oncology (SIOP) and of the SIOPEN, the European group for neuroblastoma of SIOP. He has published many papers in international journals particularly about paediatric haematology and oncology.


view the publications
N.B. the number of publications can affect the loading time of the information